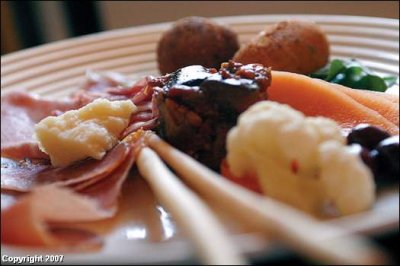 Even before assuming the title of executive chef of Valentino's Ristorante in August 2006, Paolo Tramontano began chipping away at a menu that had rigidly stood its ground for 15 years. But it took another year for him to convince Kevin Beitter—who, with Ron Kemp, bought out the remaining Valentino partners in 1999—that the chicken parmesan needed to go sleep with the fishes. Beitter's first trip to Italy this spring, during which he and his family ate their way through the country, helped support Tramontano's argument: nowhere did the Beitters find a single menu that listed pollo alla parmigiano.

"He'd been bugging me about it for a long time, but it was something our customers liked, it had always been on the menu," says Beitter, sitting at table and enjoying a glass of white wine after a busy night on the floor. "When I got back from Italy, I said 'OK, do it, get rid of the chicken parm!'"

Tramontano, who's had an equally busy but a far hotter night in the kitchen, is drinking red. He lifts his glass to Beitter, and smiles slightly. Their choices in wine reflect their different personalities. Beitter, who grew up in Texas, is in his mid-forties, polished and poised, with a genuine amiability. Tramontano, who turned 32 in July, is from Naples, and approaches everything in his life, from his 4-year-old son to his food, with a fierce and robust passion. Together, this unlikely partnership—which benefits greatly from the long-term relationships built by gracious Nashville native Kemp—are determined to win the hearts and palates of diners seeking a true taste of Italy.

Beitter met the late Tom Allen while working in Texas for Sfuzzi, a chain of contemporary Italian eateries. Allen brought him to Nashville in 1994 to run Valentino's, then a part of the Z1 Group restaurants. When Allen passed away and new owners took over, Beitter was persuaded to stay. He inherited a kitchen that had been under the same toque since the restaurant opened in 1991. Chef Sime Glavin, who was actually Croatian, leaned Italian-American; on one menu from the mid-'90s lasagna was described as "pasta stuffed with meat and ricotta cheese." 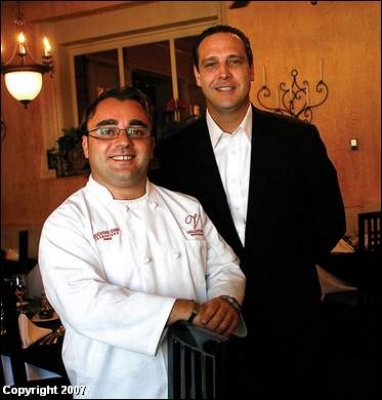 By comparison, Tramontano's lasagne tradizionale is "homemade pasta, layered with Bolognese sauce, parmesan cheese and béchamel sauce." Even with that upgrade, it's not the chef's favorite dish, though. "It is good—if you like lasagna," he says with a nearly audible roll of his eyes.

When he was just 14, Tramontano enrolled in culinary school and worked in restaurants on weekends and during the summer holiday. Unlike Beitter—who grew up working in restaurants—Tramontano was not born into that culture, but once he got a taste, "it was like a drug. You like the feeling, the energy, the action of a kitchen. A few times I tried to leave it, but I couldn't. You have to feel it, you have to have a passion for the kitchen, because it is very hard work."

After working in several regions of Italy and for a time in Barcelona, he came to New York when he was 26, ultimately landing for two years at the café in MOMA, the Museum of Modern Art, until the museum closed for renovation. He and his wife went to Miami, then New York, then Italy before settling in Nashville—her home—a few years ago. "It was very hard to find a chef's job, there are not many Italian restaurants here," he remembers. "I went to Mario [Ferrari], and he didn't need anyone. He sent me to meet Peter [Marti, Valentino's unfailingly impeccable maitre'd] and Kevin. They had nothing open in the kitchen, but told me I could work as a server. That was very hard. I missed cooking so much. I did it for two years, but I had to move on when there was a chef opening at Antonio's."

In February 2006, Tramontano was persuaded to come back, this time in the kitchen, with the understanding that Chef Sime was cutting back on his hours, and would soon be retiring. During the transition, Chef Paolo began by sending out specials that, by word of satisfied mouth and one glowing review in the Tennessean, caught the attention of Italian foodies in Nashville, drawn to their simple authenticity, and authentic simplicity. "When we were in Italy," says Beitter, "we found that though cooking styles and ingredients varied from region to region, what was consistent was simplicity, freshness and quality ingredients." 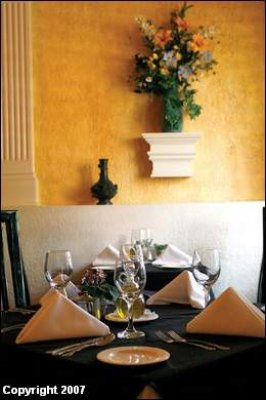 In August 2006, Glavin packed up his knives, and Tramontano was officially in charge. He found his sous chef in the dining room—fellow Neapolitan Massimo Esposito had been working as a server at Valentino's since closing his eponymous restaurant in Smyrna. The two (who discovered they'd grown up within 15 minutes of one another) immediately hit it off, and have not only infused a tired and virtually moribund kitchen with verve, creativity and confidence, they've raised the culinary bar to heights never before aspired to by this restaurant, and declared themselves the upscale answer to the question posed more than any other to Nashville food writers: "Where can I get good Italian?"

A party of four can begin by sharing the Antipasto Valentino, a platter of Italian specialties one might nibble on at a table in a typical restaurant or home in Italy: nearly translucent ribbons of imported prosciutto wound around light-as-air breadsticks, thicker slices of speck (bacon) wrapped chunks of provolone, crispy croquettes fashioned of creamy mashed potatoes and of rice flavored with red sauce, caponata (a chunky relish of eggplant, onion, tomatoes, olives and anchovies) and roasted marinated peppers. A bowl of gnocchi—dreamy pillows of potato dumpling luxuriating in a creamy sauce with petit green peas, sautéed mushrooms and seared prosciutto—is most comfortably shared by two. A fat link of Italian sausage is split, grilled until the natural juices seep from the sweetly seasoned ground pork, then topped with fresh mozzarella. Lighter alternatives are offered by the blood-red hand-pounded carpaccio di manzo on spring greens with parmesan curls, or fritto di calamari e zucchini—rings of squid and matchsticks of zucchini coated with finely crushed breadstick crumbs, flash-fried to golden perfection and heaped upon a plate, best appreciated with a firm squeeze of halved lemon. 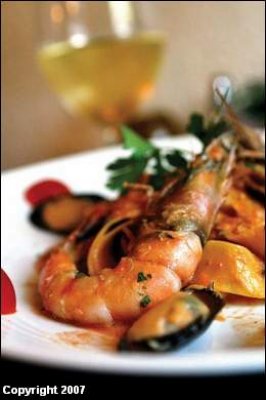 Valentino's is the only restaurant in Nashville that still offers a Caesar elaborately prepared tableside, and such a rare opportunity should not be missed, particularly when veteran server Andrei Lucaci performs the ritual with such seasoned flourish.Every region of Italy is represented on the extensive—nearly exhaustive—repertoire of pastas and chicken, veal, meat and fish entrees. Lombardy's heavenly risotto, Apulia's delightful orecchiette ("little ears"), Tuscany's inclination to fagioli, Liguria and Campania's appreciation of fresh produce, and, of course, Emilia-Romagna's passion for pasta. The menu is a marketing tool for the country's most well-known products and flavors: olives, anchovies, garlic, eggplant, artichokes, white and black truffles, oils, vinegars, glorious cheeses and cured meats, aromatic and flavorful herbs like basil, rosemary and sage and, of course, the ubiquitous pear-shaped tomato.

Minimalists will appreciate studies in simplicity like pesce spada alla Livornese (swordfish pan-seared in olive oil, then baked with olives, capers and tomatoes); agnello griglia (baby lamb chops, grilled and finished with olive oil and fresh herbs); while classicists won't be able to resist vitello picatta or saltimbocca. Pondering the 30-plus items available as entrees can provoke choice paralysis, and since the restaurant seems resistant to down-sizing (something I urge them to reconsider), diners can narrow the possibilities themselves to one of the daily specials which will showcase what came into the kitchen that morning, or "ask Paolo." If you're very fortunate, he may come to the table to inquire of your experience with some of his self-bottled citrus-sweet limoncello, made from a 150-year-old recipe handed down from his grandfather. Approach with caution—it's delicious but deadly, an Italian improvement on moonshine. The selection of Italian reds and whites is supplemented with familiar vintages from California. Service is skilled and light-handed, friendly but not overly familiar.

Wining and dining Valentino's-style takes place in one of three rooms, each with its own unique ambiance. At street level is the formal dining room conservatively painted in white and ocher; up a short flight of stairs is the small bar, and a warmer room of brick walls brightened with large and vibrantly illustrated vintage Italian advertising posters. Black linen on the tables mirror the tall black chairs, small sprays of flowers pick up the bright colors of the posters and Italian music pleases the ear without intruding on the conversation. Cooler by several degrees in temperature but as cozy and intimate as a secret is the grotto-like cellar, also walled in brick and the original massive foundation stones, polished cobblestone floor and a corner fireplace.

Valentino's address spans more than 100 years, residing in one of the few remaining late-19th century town homes that once lined West End Avenue, an enduring vestige of old Nashville. With a renewed commitment from the owners and a youthful and energetic presence in the kitchen, it seems assured of claiming a place in the new Nashville.

TO READ MORE FROM THE LATEST ISSUE OF NASHVILLE LIFESTYLES PICK ONE UP TODAY!